When you book with an account, you will be able to track your payment status, track the confirmation and you can also rate the tour after you finished the tour.
Sign Up

Or Continue As Guest

When you book with an account, you will be able to track your payment status, track the confirmation and you can also rate the tour after you finished the tour.
Sign Up
62

Why Book With Us?

Do not hesitage to give us a call. We are an expert team and we are happy to talk to you.

Bosnian Voyager organizes the most beautiful tours and connects two capital cities of ex. Yugoslavia – Sarajevo & Belgrade. In this tour, we will discover eastern Bosnia and western Serbia, where we will visit the 7 biggest touristic attractions, as well as locations that are on UNESCO’s list of world cultural heritage.

This is the tour of connections between the two countries and two capital cities. It can start both from Sarajevo and Belgrade, depending on your situation, but for now, we will focus on the Sarajevo-Belgrade tour.

The best way to arrange your time and money in one day and visit the most attractive locations of these regions connecting Sarajevo and Belgrade.

Deeply discover and understand 2 neighboring countries with a rich history.

Cover 6 magnificent locations in eastern Bosnia and western Serbia which are out of main, standard roads.

A visit to 2 places that are under UNESCO’s world cultural heritage list will fascinate you.

Enjoy the interesting stories told by our guides in the untouched natural wild of these regions.

Visit the medieval necropolis that witnesses the history of the Bosnian Kingdom (that is also under UNESCO).

Enjoy the river cruising on river Drina and hear wonderful stories from our local guides about Ottoman history and architecture.

Walk through one of the most beautiful ethnic villages, “Drvengrad” which was built by famous Serbian producer Emir Kusturica (for the needs of filming the movie ‘Life is a miracle’’.

Enjoy the ride on the train Šarganska Osmica and feel the spirit of the past and beautiful scenery of the Natural Park “Mokra Gora”.

Enjoy one of the most beautiful views in this area from the Banjska Stene to Lake Prućac, which will remain in your memory for a long time.

Admire the view of the small house and the rock on the Drina river and take the most beautiful photos for a nice memory.

Because of the early morning departure, this tour is a “from door to door” type of tour, where our guides will pick you up at your desired location.

Every day at 8 am from Sarajevo and Belgrade.

This is one of our most popular tours, with this tour we cover 7 of the most interesting locations between the two main cities of Sarajevo and Belgrade, this is a tour that lasts on average about 12 to 14 hours, and our goal and idea is to create the greatest travel satisfaction for you in order to make this tour something great to remember.

The tour itself covers the regions of eastern Bosnia and western Serbia, where in addition to the visits you have the opportunity to cruise on the Drina river and hear a beautiful story about the history of the city of Višegrad and the Mehmed Paša Sokolović Bridge from the experienced guide, and in addition to the cruise in the scope of the tour itself, we visit the national park “Mokra Gora” in the scope of which the railway station “Šarganska Osmica” is located, where you will have the opportunity to ride a narrow-gauge steam train that once served to transport and connect Sarajevo, Belgrade, and Dubrovnik.

As part of our tour from Sarajevo to Belgrade and vice versa, you will have the opportunity to visit Tara National Park, where you will enjoy the beautiful view from the viewpoint “Banjska Stena”, which will be deeply etched in your memory, especially the view of Lake Perućac.

Within the National Park “Mokra Gora” our next destination is the ethnic village “Drvengrad” which was built by the famous Serbian director Emir Kusturica for the purposes of filming the film “Life is a Miracle” where one of the main roles is played by the famous Hollywood actress Monika Belucci, in the scope of Drvengrad you have, you will have the opportunity to walk through the squares dedicated to Diego Armando Maradona, Stanley Kubrick, Yuri Gargarino and many celebrities of the last century.

One of the points we will visit is the city of Višegrad itself with the tourist attraction “Andrićgrad”, which is dedicated to our famous writer and winner of the Nobel Prize for Literature, Ivo Andrić, who received the award for the work “The Bridge on the Drina”.

At the end of the tour itself, we always devote time to our distant history and the time of the Kingdom of Bosnia, which spread over this region, and we will visit the witness of that time, the “Necropolis” of Bajina Bašta, as a witness of the greatness of the Kingdom of Bosnia, the “Stećci”  themselves come from the period before the Ottoman conquest of these territories, where the most prominent personalities of that time were buried in the necropolis.

In this wonderful tour, with a large number of locations we visit, we guarantee that you will not regret it, and we deeply believe that you will enjoy every moment, our mission and idea is a satisfied traveler, the ultimate opportunity to combine the transfer itself and a tour of the most beautiful locations of Eastern Bosnia and Western Serbia.

The meeting and departure

Our departure from Belgrade and Sarajevo starts at 8 am, where our guides and drivers will pick you up at the desired address because this is a door-to-door tour transfer. At the very beginning, our guide will kindly introduce himself and guide you to the complete content of the tour from Sarajevo to Belgrade and vice versa, the goal is to introduce you in detail to all the details of the tour, so feel free to ask any question, our guides will do their best to ensure that you are never left without an answer while enjoying a beautiful ride surrounded by nature.

After departure from Sarajevo, the first point of our tour is the city of Višegrad, a place of history, love, and suffering during the last war in Bosnia and Herzegovina. During a drive of about 2 hours through the beautiful Bosnian mountains and the Drina river canyon, we arrive in the famous city of Višegrad, and first, we visit the bridge Mehmed Paša Sokolović, which is on the UNESCO list of protected world heritage, built by the grand vizier of the Ottoman Empire Mehmed Paša Sokolović in the 16th century, the credit for the greatest glory of this bridge goes to one of the greatest writers from this area, Ivo Andrić, who wrote the book “The Bridge on the Drina” received the Nobel Prize for Literature, we advise all our travelers to read the book in order to better and more easily understand the history and culture of these areas, and it is the work of the greatest Ottoman builder Mimar Sinan.

When we finish with a leisurely walk over the Mehmed Paša Sokolović Bridge, we continue towards our hosts from Višegrad, who will provide us with a beautiful boat ride on the Drina river, where a local guide will tell you the most beautiful stories of the city of Višegrad, at the end of the boat ride, our next point is Andrićgrad.

Andrićgrad or Kamengrad is a cultural center and, in a way, an ethnic village built by the famous Yugoslav director Emir Kusturica and dedicated to one of the greatest writers in the history of this region, Ivo Andrić, winner of the Nobel Prize for Literature for the work “The Bridge on the Drina”, which made the city of Višegrad famous. The complex itself includes about 50 buildings made of stone and monuments to great personalities from this area.

After we have finished in Višegrad, on the way to the border with Serbia, we stop at our next location, which is one of the most important Orthodox monasteries in this region – Dobrun, located on the border between Bosnia and Serbia, bears witness to the great history of these areas, and we will do a small walk through the Monastery to learn as much as possible about the history of these areas, and also to enjoy the beautiful natural surroundings of the Monastery, which was built in the 14th century and has a very turbulent past.

After crossing the border, we enter western Serbia and automatically enter the Nature Park “Mokra Gora”.  Our next point is a visit to the ethnic village “Drvengrad” or “Mećavnik” built by the famous Yugoslav director Emir Kusturica, who built this beautiful ethnic village for the purposes of filming the film “Life is a Miracle” where the main role is played by the famous Hollywood actress Monica Belucci.

The ethnic village complex itself contains a large number of buildings, and the walk itself takes you back to history, so you can walk along the streets of Ernest Čegevara, or Yuri Gagarin square, within the complex there is also a hotel with many restaurants, so in agreement with the group we can organize lunch there.

After lunch and a visit to “Drvengrad”, our next location is the Šargan Railway Station or the popular “Šarganska Osmica”, but it is important to emphasize that this is no ordinary train and ordinary ride.

Šarganska Osmica is a narrow-gauge steam train unique in this region (rail width 760mm), built in 1925 with the purpose of connecting Belgrade and Sarajevo, it is known for representing the pinnacle of railway construction at that time, and had the ability to reach 300 meters in a very short time.

Today, the length of the railway itself is 15,440 meters, and for construction purposes, 22 tunnels were dug and 5 bridges were built. Unfortunately, in 1974 the Yugoslav authorities closed the station and stopped traffic, and today it is only used for visits and rides by tourists who want to feel the spirit of history, and perfect engineering of the period. The train ride is simple, exciting, and stunning in every sense, making it another location you will remember for a long time.

As soon as we finish the train ride, we continue our journey toward Belgrade.  Our next location is Tara National Park, one of the most beautiful national parks in Serbia and the region.

In 1981, the location was declared a national park due to its incredible biological diversity, and it is one of the places in Serbia where you can enjoy complete nature.

One of the most important points in Tara National Park is the Banjska Stena viewpoint, from which you will enjoy a stunning panorama of Lake Perućac, and at the same time, you will be able to see the Drina River, which is the natural border between Serbia and Bosnia.

Bajina Bašta – House on the Drina and Nekropola

After visiting the Tara National Park and the Banjska Stena viewpoint, we start our journey towards Belgrade, where we will first visit the medieval Necropolis, which also bears witness to the history of the Kingdom of Bosnia. We will stop at the location where the House on the Drina River is located, where we will make a short break during which you can enjoy the beautiful view of the river Drina and the fisherman’s house on the Drina, which has become the symbol of the city of Bajina Bašta. After that, we head directly to Belgrade and expect to arrive in Belgrade in the late evening hours. 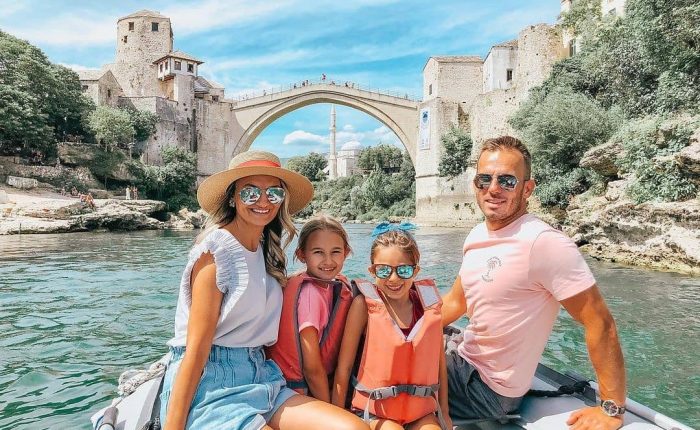 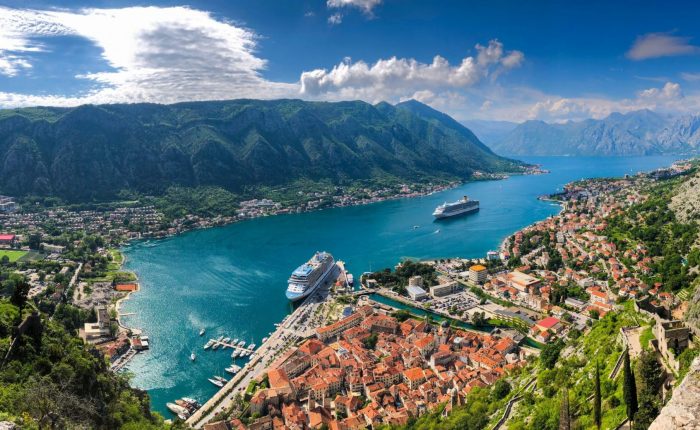 Full day Tour from Sarajevo to Dubrovnik (Kotor or Split)